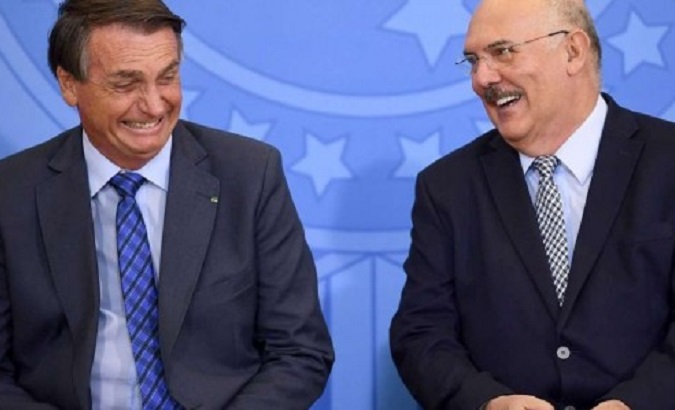 On Wednesday, the Brazilian justice ordered the arrest of the former Education Minister Milton Ribeiro for crimes related to the management of public funds to favor evangelical pastors allied to the far-right President Jair Bolsonaro.

The Federal Police is investigating Ribeiro and pastors Gilmar Santos and Arilton Moura in a case of passive corruption, prevarication, influence peddling, and participation in an illegal scheme that involved mayors in managing funds from the Education Ministry.

“The former minister and the neo-Pentecostal pastors accused of corruption are in jail. In an audio leaked in March, pastors admitted that the Brazilian president asked to give money to ‘pastor Gilmar’s friends’ as a priority,” teleSUR ccorrespondent in Brazil Nacho Lemus tweeted

The Federal Police is investigating whether the ex-minister favored the pastors and whether he acted in a parallel cabinet made up of religious leaders, who would actually be informally managing the National Fund for the Education Development (FNDE).

The tweet shows President Jair Bolsonaro (C) praying with the pastors accused in an influence peddling and corruption case.

In the leaked audio, Ribeiro admitted that the funds were transferred at the request of Gilmar and that the entire scheme was carried out with the consent of Bolsonario, who wanted to prioritize education in the municipalities governed by his far-right allies.

To show confidence in his minister, “Bolsonaro said in March that he would put ‘his face in the fire’ for Ribeiro. Then, under pressure from the press, the pastor of the Santos Presbyterian Church left the ministry. Ribeiro is close to the first lady Michelle Bolsonaro, who is the strong link with neo-Pentecostals,” Lemus explained.

Records of the Institutional Security Cabinet (GSI) show the presence of the neo-Pentecostals pastors on several occasions in the Planalto Palace. On March, several Brazilian opposition legislators called for the opening of an investigation against Bolsonaro for influence peddling.

Please disabled your AdBlocker to enable you use our website seamlessly